As he was working on his book Acid Test (reviewed in the previous post), Tom Shroder decided to conduct some in-depth research. His account of his first psychedelic journey in 35 years appears here on reset.me. Shroder’s lucid style makes his story far more readable than the usual trip report. I can’t recommend that you go it alone like Shroder did–experienced guides can provide a deeper and safer journey–but his tale of psychedelic rediscovery is well worth your time.

“Acid Test” gets the story straight

Acid Test: LSD, Ecstasy, and the Power to Heal by Tom Shroder is the book that a lot of us in the psychedelic research community have been waiting for. To understand why, consider the following excerpt in which Shroder retells the famous story of Albert Hoffman’s discovery of LSD.

“First the drug had to be tested extensively on animals to determine any acutely toxic effects that Hofmann had merely been lucky to survive. Animal tests would eventually provide some curious results. Mice given LSD moved erratically and showed ‘alterations in licking behavior.’ Cats’ hair stood on end and they salivated, indications they were having hallucinations that were threatening or enticing. When researchers introduced mice into the cats’ cages, instead of attacking, the felines would ignore the rodents’ intrusion or sometimes even appear frightened by them. Dosed chimpanzees did not show any obvious signs of being affected, but the normal chimps around them tended to become extremely upset, which Hofmann attributed to the test animals’ failure to maintain social norms perceptible only to the chimps.” 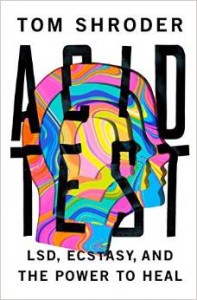 Shroder enlivens this familiar story with intriguing details and remarkably clear prose. He turns a journalist’s critical eye on a notoriously fuzzy topic. There’s no metaphysical speculation in Acid Test, just moving stories of people whose lives were changed by nature’s most powerful and mysterious psychoactive chemicals.

Nicholas Blackston is a former US Marine who fought in Iraq. His horrific experiences in combat left him scarred by post-traumatic stress disorder.

Michael Mithoefer is a psychiatrist who discovered the transformative power of LSD as a college student. He conducts research studies using the psychedelic/stimulant MDMA (“Ecstasy”).

Rick Doblin is the founder of MAPS, the Multidisciplinary Association for Psychedelic Studies. He has been a leading advocate of psychedelic research for decades.

Shroder weaves the stories of these three lives together with the twisty legal and scientific history of psychedelics. He uncovers some fascinating and little-known pieces of the tale. For example:

“By the mid-1950s, researchers had experimented with LSD during therapy for various neuroses, depression, addiction, psychosomatic illness, and emotional and physical trauma. Scores of trials including hundreds of subjects were conducted, and most reported positive results. In 1954, psychiatrists at an English hospital set aside an entire ward for conducting LSD therapy with patients who had severe, chronic, treatment-resistant mental illness. They concluded that sixty-one out of ninety-four patients recovered or improved after six months. LSD appeared to be ‘of utmost value in psychotherapy,’ the lead investigators concluded…”

Shroder makes it clear that psychedelics were a well-established and promising tool for research and therapy in the 1950s and 60s. We can’t calculate the cost of the War on Drugs to human life or scientific progress. We can, however, be grateful that organizations like MAPS and the Heffter Research Institute kept the flame burning during dark times.

The stories of Shroder’s three protagonists come together near the end of the book when Nicholas Blackston enrolls in a MAPS-sponsored study on the use of MDMA for treating PTSD. Ecstasy helped Blackston escape from the prison of war trauma and discover new freedom. Today, he’s an eloquent advocate for psychedelic therapy and living proof of its success.

If you’re new to psychedelic studies, this book is an excellent starting point. Shroder, the editor of the Washington Post magazine, knows how to present a big and complicated story in human terms. He has a gift for wrapping hard issues in a compelling narrative. The one thing I would have done differently is to shift the balance of the book’s content to include more on psychedelics and less biographical detail. That’s a quibble, however.

I hope that Tom Shroder continues to cover psychedelic research. We need him.

Aphorism of the day: Certainty

The human heart and mind will settle for truth when they can’t have certainty.

One holiday tradition at my house is watching Emmet Otter’s Jug Band Christmas, a Jim Henson Muppets TV special from 1978 based on the book by Russell and Lillian Hoban. Right now, I’m thinking of the scene near the end where Ma Otter and her son Emmet are walking home late at night after the tragedy that cost them their most valuable possessions and any hope of a happy Christmas. Ma says “I guess I should feel pretty bad, but the funny thing is that I don’t. I feel pretty good.”

2014 was a lousy time for a lot of us. I can’t recall another year when so many of my friends and loved ones struggled through serious, life threatening illnesses. Cancer, heart disease, Alzheimer’s. The social world wasn’t much healthier. My state and nation buckled under their load of violence and injustice.

Still, here we are on New Years Eve, ten days out from the Winter Solstice, and the light is returning to the world. Like Ma Otter, I’m feeling pretty good.

Maybe we needed some adversity to bring out the best in us, or maybe I’m just starting to pay attention, but this long and weary year offered a lot of kindness. I’ve been overwhelmed by countless acts of basic human goodness from hospital staff, caregivers, emergency workers, cab drivers, casual acquaintances, and total strangers. If the world does come unglued, maybe we’ll take care of each other after all.

My biggest inspiration of 2014 came from the community of people working in psychedelic research. I spent a good chunk of the year in the company of the scientists, MDs, and psychologists who do the research and the organizers, business people, philanthropists, and volunteers who support the work. I’ve never seen another project or institution maintain such high standards of professional quality. It’s humbling.

When you have an example like that in front of you, what else can you do but try to live up to it? That’s my goal for the new year.

I hope your new year brings the same care and kindness that inspired me in the last twelve months. Keep in touch and I’ll see you in 2015.

Every psychedelic journey is a surprise. You never know which door will open when you take the pill. You might wind up in the Garden of Eden basking in rays of divine bliss or at the bottom of your own grave decomposing in the primal muck. A million destinations, a million trials and rewards, are all in there waiting for you with no guarantees.

That’s not the kind of result we normally hope for with drugs. With other chemicals—antibiotics, painkillers, recreational substances like alcohol or marijuana—the whole point is predictability. You want the hundredth dose to act just like the first.

With psychedelics, however, a single person can take the same dose of the same drug on two occasions and have two completely different experiences. Even veterans get butterflies when they swallow the pill. Fear of the unknown is human nature.

The uncertainty scares off some people who might otherwise benefit from a ride on the psychedelic train. When I discuss the subject with friends and acquaintances, many of them say “I’d be afraid of losing control” or “I’m too chicken.”

I think these people get it. They instantly understand the point of psychedelics. It’s not about flashing colors or surreal ideas. The point is to let go.

When you take a psychedelic substance, the drug grabs you up and pulls you out of your little room and your little ego and plops you down on the brink of the cosmic precipice and gives you a shove. Yeah, you can dig in your heels, but it’s much easier to take the plunge. For some of us, it may be our first opportunity to surrender.

There’s no way to know what lies beyond the wall of surrender, but many people report that it’s exactly what they needed. Perspectives and priorities turn upside down. Big fears and looming difficulties shrink to nothing while small details reveal their true beauty and importance. For a small investment of courage, the world is born anew.

I don’t think that anyone gets out of this life without letting go, even those who put it off until the moment of death. You certainly don’t need to take a pill. Many people shouldn’t. One way or another, though, all journeys lead to surrender. For those of us who have a hard time learning to let go—and that may be the majority of the human race—psychedelics offer a unique blessing.

Sarah’s story of her psilocybin treatment for alcoholism

Here’s a moving interview with Sarah, a volunteer subject in the first research study in 50 years on the use of psychedelics as a treatment for alcoholism. The study was conducted at the University of New Mexico. Sarah received two doses of psilocybin along with therapy for alcohol dependence. In her interview, Sarah speaks of the profound changes that occurred in her life as a result of her experience with psilocybin. You can find a longer version of Sarah’s interview on the video page of the Heffter Research Insititute.

The nature of psychedelic experience

If you’re like most people, you’ve never taken a psychedelic substance like LSD. Maybe you’ve had children, though, or fallen in love or held the hand of someone near death. Then you know what it’s like at the deepest layers of human life. If you ever encounter psychedelics, the experience may seem familiar.

For those wondering about the therapeutic value of entheogens, here’s an excerpt from the film The Medicine–Medical Research on Psychedelics. I found Annie’s story very moving.

“A woman diagnosed with terminal cancer is given a dose of psilocybin to curb severe anxiety in the context of a Harbor-UCLA medical study. Following treatment, anxiety and barriers in the woman’s personal relationships were significantly alleviated.”

We gather today to join a great journey that began long ago when our ancestors discovered plants with the power to join earth and heaven. We remember with love the generations of brave men and women who went before us on the path of sacred chemistry.

As we prepare for the unknown, we’re grateful for the light that that came to us from Arthur Heffter through Albert Hoffman and Stan Grof into our own time with Alexander and Ann Shulgin and to those gathered here. May wisdom guide us.

Now it’s time to open the door and pass over the threshold. I accept this cup with gratitude to the science that offered it and to the spirit that formed my nervous system so that I might understand. I dedicate this work to the greatest good of our species and this planet.

So may it be. Now and always. Amen.

Aphorism of the day: the task of spiritual people

As spiritual people, our task is to help others discover their depths.